Leopards come to Rehab Centre
In last 2 ½ months we have seen 8 leopards come into the Rehab Centre. With the ever increasing ‘problem animal’ issues lately the first reaction is to shoot them.

Through the tireless efforts of Brian Jones and the dedicated team of staff and volunteers the local community has embraced the notion of catch and release.
While there are not nearly enough farmers and agriculturalists on board, education continues. These teachings have reached as far as Middleburg from which we have received no less than two leopards in a few weeks.

So far 2 leopards have been released on Game Reserves and the other 6 currently are still with us. The team is currently working hard to relocate 4 more leopards to Malawi where a precious 4 have already been sent at great expense but you cannot put a price on freedom? Dwindling available release sites mean we must stretch further afield.

What would now be of great benefit is to raise money for satellite collars to be fitted on all four so that we can track their progress. The two cubs that are completely wild will continue their stay with us until a suitable placement can be arranged for them. Unfortunately they are still too young to travel to Malawi with their mother but we are focused on finding them the best future possible. 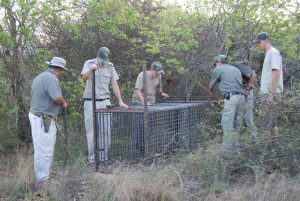 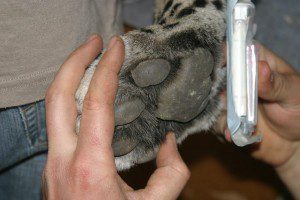