Recently our baby leopard, Delilah, who arrived at Moholoholo Rehab Centre in September last year, had recently taken ill. Her condition deteriorated rapidly over a couple of days and with the assistance of our local vet initial steps were taken. Delilah was suffering from blood in her stool and her mood was very sombre, nothing like our normal happy, bouncy girl. She was moved to the clinic and made comfortable. However overnight she deteriorated even further and became very dehydrated and lethargic. Brian made the quick decision to take her to our vet in town in order to rule out any risk of her getting worse. Delilah reluctantly entered the travel box and the moment the doors were shut she was whisked away.
On arrival she was sedated and the veterinary team attended to her. With a flurry of movement she was quickly receiving multiple bags of fluid and antibiotics. Several tests were performed but no source of bacterial infection could be found. While these results did not rule out infection from another source it left us with no firm answer. With further treatment and observation needed she was left at the vet.
Driving from the scene was a very difficult moment but the team knew that she was in the best hands. Two days later Delilah was brought home and placed in the clinic for observation and some TLC. What the students were not aware of was that while Brian had visited Delilah at the vet she was allowed to wonder around the room as she had done when she was a cub. Even though she had been hand raised, leopards are very unpredictable and no one had entered her enclosure since arrival. With the great generosity of Brian, the students were surprised with an absolute treat! Brian opened the clinic cage door and allowed Delilah to meander through the students. Stunned into silence at being so close to such an amazing creature, they did not hesitate to make the most of this opportunity. The room was filled with the clicks of cameras as hundreds of photos were taken. Delilah certainly seemed at home as she made her way through the crowd.
Brian also explained to the students that while in the clinic, Delilah is easy going as this is because the environment is unfamiliar. However, if she was in her own enclosure she would have the confidence to play a little rougher than what the human body can withstand from such a powerful animal. One of those rare moments we all took in every minute we had.

Like a shooting star, our little girl is home, healthy and has felt the great love and admiration we all have for her. 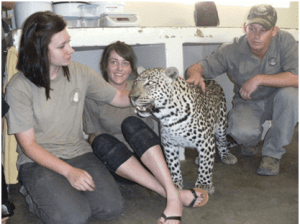