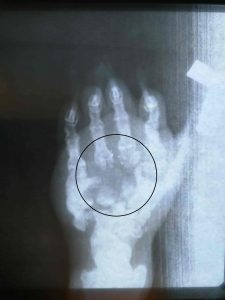 The honey badger we received this week with the injured foot was taken to the vet where x-rays were taken, sadly confirming our suspicion. The bones around his toe joints were completely shattered. We believe he acquired this injury most likely through being caught in an old gin trap.

Since his arrival at the Moholoholo clinic the honey badger has been strangely comfortable around humans, this has led us to believe that maybe he has been hand raised. He is relaxed when in the company of people, happily eats in front of you and amazingly allows you to touch him with no signs of aggression.

From speaking to multiple vets, they advised that release would not be suitable as it will take many years for the foot to calcify properly, until then only hindering his performance in the wild. The combination of his injury and being hand raised means that he will look for easy prey and not be wary of human activity. This means that he is likely to head towards farms and ultimately would be shot.

Due to this unfortunate situation he will remain here at Moholoholo rehabilitation centre.