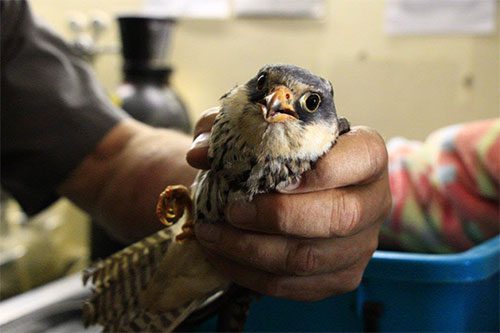 A few months ago, a caring couple brought us an Amur Falcon all the way from Middleburg! They drove 3 and a half hours to bring him here as he had a wound on his wing which was impairing his flying ability. We checked him out on arrival and found that he was very skinny.

Whilst the wound on his wing was healing we fed him lots of nutritious food in order for him to pick up weight. About a week after his arrival his wing was in perfect working condition and he was now a healthy weight so we placed him in a long enclosure to see how strong his flying was, to our delight he flew flawlessly. We had him ringed and early the next day we released him at one of the dams on our farm, Carole Matzler-Messmer was our enthusiastic volunteer who got to release him! We were glad to release him so quickly so that he could make it back over to the northern hemisphere in time for the seasons to change!

Amur Falcons breed in Russia and China and then in winter migrate all the way down to Southern Africa. As much of the migratory path is over large bodies of water, it was always a wonder how the falcon managed to sustain himself on the journey, it was then discovered that the timing of their migration coincides with that of dragonflies over the Arabian sea. They complete the longest sea crossing of any raptor, up to 22000 kms!