The volunteers had some fun getting messy this week all in aid of providing our animals with some enrichment. We set them the challenge to create balls out of papier mache that we then filled with delicious treats for some of our residents. 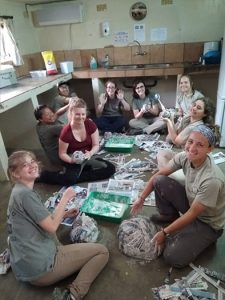 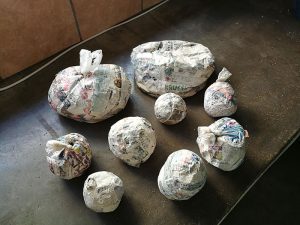 Cheetah and leopard vs watermelon

This month it was time for the cheetahs and leopards to take on the watermelon challenge.

First up were our two young cheetah cubs. The youngsters both excitedly ran up to the new and strange objects inside their enclosure, not too sure how to react, they could smell the meat inside and began to comically lick the outside of the melon but soon the female cub realised what she must do to get to the treat hidden inside. 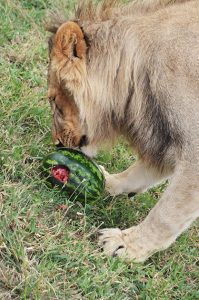 The taste of watermelon did not put them off and soon the male had got the hang of it too. After some time both cubs managed bite away enough of the watermelon to get to all the meat inside, but admittedly the little female demonstrated that she
is the more intelligent sibling here! These slender built cats are not as powerful as other predators and therefor they could not break open the melon in one shot like the lions could but instead their experience needed much more patience. 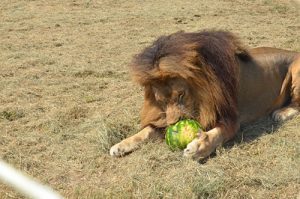 We left the melons in their enclosure overnight so they had time to play with them and the next morning we collected what little was left… safe to say these two definitely have a taste for watermelon!

The leopards were next… our female leopard ran to the watermelon gripped it in her strong jaw and ran up onto her concrete house to enjoy the treat in peace. She cleverly rolled the watermelon around soon realsing that the pieces of meat would fall out of the small hole. Our male leopard was definitely the centre of everyones attention though, he crunched down on his melon right infront of us all and we could hear the power in his jaw and paws as the thick watermelon shell broke so easily. Every so often the two leopards would argue from a far, making sure they both knew to keep their distance and shocking our volunteers with how fierce their growls can be. Even once all the meat was devoured they continued to chew away at the remains of the watermelon, a nice refreshment on a warm day. 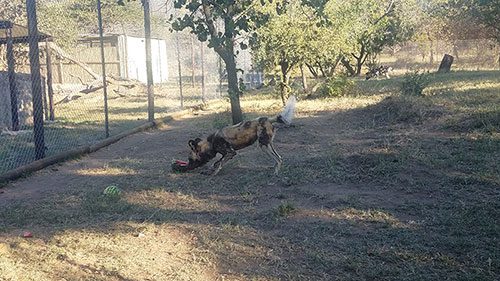