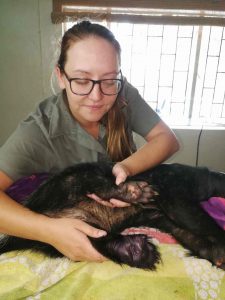 An elderly man from Potgietersrus recently contacted us about a honey badger. The badger had taken up residence under an abandoned car on his property. At first the man didn’t mind his new neighbour… but after the honey badger had managed to kill 50 of his fowls he couldn’t risk losing anymore.

However, this isn’t just a simple relocation story… the old farmer noticed that the honey badger wasn’t putting any weight on his back-left leg. He didn’t want to leave the honey badger in pain so began giving him medication daily and soon realised that very unusually the honey badger was not aggressive towards the land owner, instead gently taking the piece of meat with medication inside from his hand.

We told the farmer that we would be able to help him, so we travelled the 3 hours to his farm in order to catch the honey badger. He was then transported back to the rehab where he was sedated and examined. Upon inspection we found that his back-left foot was extremely swollen and most likely broken at the toe joint.